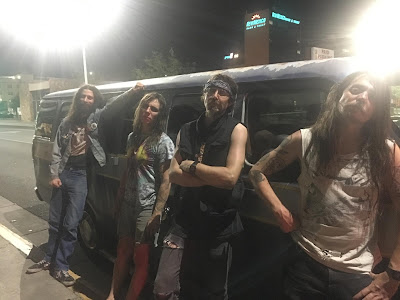 Well, I feel I'm recovered enough to say a few things about the Owl US tour that was recently completed.

After having not toured at all in over a year, and not been off the West Coast since 2013, it was certainly rather ambitious to get back in the game with a full US barnstorm. But we felt we had never properly promoted the Screech LP, and we thought people would appreciate us coming around with it. We were mostly right.

I was worried that in this day and age, we would be limited to playing only bar and club shows, as the war on our beloved DIY venues has intensified, and the severe yuppification of the inner city continues in nearly every metro burg. However, in our 23 shows that we played in our 26 days on the road, we did manage to play one brewery, one bicycle shop, one punk house, one shack in the woods, one bowling alley, and one motorcycle garage! Not bad.


There were a a few firsts as well: My first time ever seeing or playing in Detroit, my first visit to Memphis, and the first time I can EVER say that Salt Lake City was one of the best shows on tour!
A word for "Iron Horsey," Axell's (trusted?) Dodge Ram Van: Although you gave us trouble nearly every day, we never once saw you on a flatbed either, which is more than I can say for most tours, long or short.

A big hats off to Magic Spiegel, for plunging right into the deep end, mastering the Owl material and riding in the (constantly malfunctioning) van for 26 days with three bickering brothers. Your mechanical and technical expertise was invaluable, and we wouldn't have made it home without it. CHEERS with a fine Saison.

Thank you to absolutely EVERYONE who helped along the way, you were many, and you are not forgotten!

And with that, on to the next adventure! More news soon!